A river that flows over some hard rock followed by some softer rock is likely to make a waterfall. Hard rocks such as granite or basalt are more resistant to erosion; that means they erode very slowly. Softer rocks such as shale or mudstone are less resistant to erosion, this means they erode very quickly. An example of a waterfall in the UK is High Force waterfall on the River Tees; in this example the harder rock is whinstone (dolerite) and the softer rock is carboniferous sandstone.

What are the four types of river erosion?

Erosion means the wearing away of rock. There are four ways in which this can happen:

As the water flows over the rock below it erodes the softer sandstone away much more quickly. This creates a step. The step becomes steeper and steeper. The river is not just flowing along, it is now plunging down. The hydraulic action of the falling water splashes back and starts to undercut the harder whinstone. 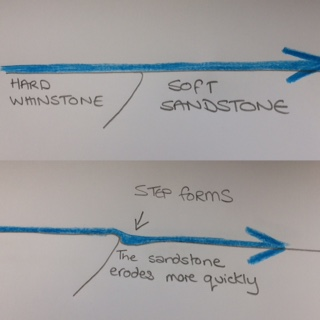 The overhang is undercut again and again, eventually falling off into the plunge pool. This happens repeatedly over a long period of time. Every time the overhanging whinstone breaks off the waterfall actually moves backwards (retreats) further upstream (towards the source).